Two of the five best curry restaurants in Scotland are in Midlothian, according to reviewers on global Internet service Google.

The Radhuni in Loanhead is ranked number two and Itihaas in Dalkeith number five in the top 20 based on Google users who left reviews after their meals.

Matin Khan, who runs Itihaas restaurant in Dalkeith’s Eskbank Road, won the Scottish Curry Chef of the Year award in 2014.

His son Habibur, Managing Partner of Radhuni, commented: “The customers of Radhuni and Itihaas are the best judges of the quality of our food and service. We are proud that diners who reviewed us on such an eminent Internet portal as Google have praised both restaurants so highly.”

Read the original article in The Scotsman here.

Read coverage of this article in The Midlothian Advertiser here.

Read coverage of this article in the Evening News here.

Write a Google Review for Itihaas. 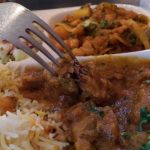 Itihaas reviewed by Gerry’s KitchenDalkeith, Itihaas, Reviews
We use cookies to ensure that we give you the best experience on our website. If you continue to use this site we will assume that you are happy with it.OkRead more