Itihaas wins Restaurant of the Year

Dalkeith restaurant Itihaas has added another award to its roll of honour by being voted the best Asian restaurant in Midlothian.

A previous winner of the titles of Scotland’s top curry restaurant, Curry Chef of the Year and best South Asian restaurant, it received the prize at the 2019 Asian Restaurant Awards held on Sunday evening at the Sheraton Grand Hotel and Spa in Edinburgh.

The awards are organised by the Asian Catering Federation (ACF) which represents the UK’s 30,000 Asian and Oriental restaurants. Bangladeshi, Chinese, Indian, Japanese, Malaysian and Nepalese restaurants all took part.

ACF Chairman Yawar Khan commented: “Winners represent these regions’ highest standards of cuisines which play such an important part in the Scottish economy.”

After receiving the award for the family-owned and run Bangladeshi-Indian restaurant on Eskbank Road, Habibur Khan (pictured) added:  “Itihaas has won many accolades at a national level but regards itself first and foremost as a community hub and service, so this latest award is special for its owners and supremely skilled staff.” 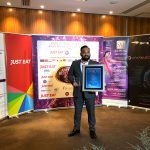 Itihaas is a finalist at the Scottish Curry Awards 2019Awards

Itihaas Asian Restaurant Awards 2019 Coverage RoundupAwards, Itihaas
We use cookies to ensure that we give you the best experience on our website. If you continue to use this site we will assume that you are happy with it.OkRead more